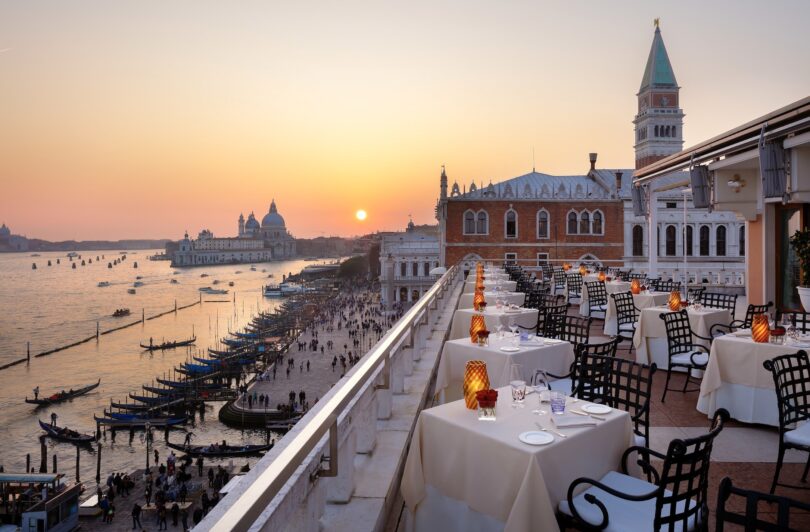 Located in the Riva degli Schiavoni region of Venice along the Grand Canal, adjacent to Piazza San Marco, the Hotel consists of three buildings: the 14th century Palazzo Dandolo and two 19th century additions linked by bridges – Palazzo Casa Nuova and Palazzo Danieli Excelsior. Hotel Danieli’s rich heritage is on display throughout the property, showcased in the beautifully preserved Venetian Gothic style architecture, along with art and antiques from throughout the property’s history.

“Italy is a beloved and important destination for luxury travellers, and we have been capitalizing on the strength of this market with property enhancements and incredible new additions to our portfolio – many of them in collaboration with our long-term partners, Gruppo Statuto,” says Bart Carnahan, President, Global Business Development and Portfolio Management, Four Seasons Hotels and Resorts. “With Hotel Danieli, we are adding another iconic property to our Italian portfolio, where we will honour the historic legacy of this Venetian landmark while also introducing the exceptional Four Seasons service experience to one of Italy’s most popular destinations.”

Venice is a significant travel market globally, celebrated for its art, culture and architecture. The city is also known for its unique geography, as it is built on an archipelago of hundreds of islands, some of which are a UNESCO World Heritage Site, connected by bridges and canals. Travellers explore the city via water or on foot, allowing them to take in the extraordinary sights and attractions at every turn.

“Hotel Danieli is a renowned and historic property in Venice, and we are confident that our partnership with Four Seasons will help usher the Hotel into its next chapter, maintaining the standard of quality and excellence that guests have come to expect of the Hotel,” says Giuseppe Statuto, owner of Gruppo Statuto. “Together with Four Seasons, our properties in Milan and Taormina have seen great success, and Hotel Danieli will perfectly complement these world-class experiences that are unmatched in Italy.”

Hotel Danieli has a long history of being one of the most luxurious hotels in Venice with an ideal location in the heart of the city. Guests will be a short walk from myriad attractions, including the market stalls of Piazza San Marco, gondola rides along the canal and Basilica San Marco.

Guests will be immersed in the splendour of the property from the moment their stay begins, enjoying unique arrival experience on boat via the Grand Canal. Guest rooms feature exceptional views of the Grand Canal, surrounding city and Venice’s Bay. The property also features four restaurant and bar outlets, which also benefit from exquisite views, as well as seven meeting and event spaces.

The Hotel will undergo extensive renovations prior to reopening as a Four Seasons experience, with renowned designer Pierre-Yves Rochon overseeing the interiors. Rochon has worked on several other historic Four Seasons properties in Europe, including in Florence, Paris, Cap-Ferrat and Megève.  During the renovation period, the property will remain open with select services and amenities available. During this time, the hotel will be operated and managed by Gruppo Statuto under the name The Hotel Danieli, Venezia.

Upon reopening as a Four Seasons experience in 2025, Hotel Danieli, Venezia, A Four Seasons Hotel, will join Four Seasons growing collection of properties in Italy, including Four Seasons Hotel Milano, which recently underwent extensive renovations of its common areas; Four Seasons Hotel Firenze; San Domenico Palace, Taormina, A Four Seasons Hotel; and an upcoming resort in Puglia.
For more images, please see here.
About Gruppo Statuto
Gruppo Statuto owns and develops luxury Hotels at the top level of the market. The Group’s activity also includes residential as well as High Street retail developments both in Roma and in Milano. Gruppo Statuto owns some of the most iconic luxury 5-stars hotels in the country, among others, the well-known Four Seasons Hotel Milano; San Domenico Palace, Taormina, A Four Seasons Hotel; the Iconic Hotel Danieli in Venice which will soon undergo an important refurbishment before reopening as a Four Seasons Hotel; the Mandarin Oriental Milano, and the upcoming Porto Cervo which is currently under development; and other Hotel projects which are under development in Romaand Milano city centres.
About Four Seasons Hotels and Resorts
Four Seasons Hotels and Resorts opened its first hotel in 1961, and since that time has been dedicated to perfecting the travel experience through continual innovation and the highest standards of hospitality. Currently operating 124 hotels and resorts, and 50 residential properties in major city centres and resort destinations in 47 countries, and with more than 50 projects under planning or development, Four Seasons consistently ranks among the world’s best hotels and most prestigious brands in reader polls, traveller reviews and industry awards. For more information, visit fourseasons.com. For the latest news, visit press.fourseasons.com and follow @FourSeasonsPR on Twitter.
About Four Seasons Historic Hotels
The Four Seasons collection of unique and architecturally important heritage hotels includes buildings whose origins range from the fourteenth to the early twentieth centuries: