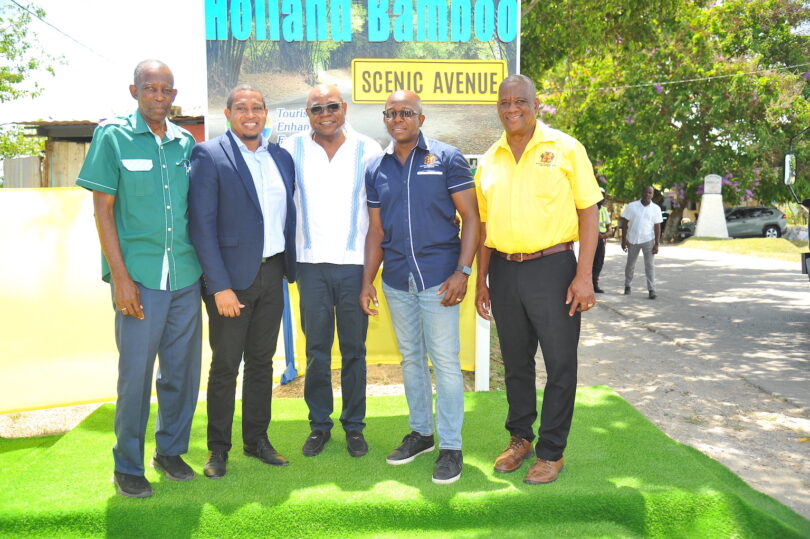 Sharing in a photo-op at the launch of the restoration initiative are (from l-r) Hon, JC Hutchinson, Member of Parliament of North Western St Elizabeth; Hon. Floyd Green, Member of Parliament South Western, St. Elizabeth; Minister of Tourism, Hon. Edmund Bartlett; Minister of Agriculture and Fisheries, Hon. Pearnel Charles, Jr; and Minister of State in the Ministry of Agriculture and Fisheries, Hon. Franklin Witter.

The Holland Bamboo Scenic Avenue, in St. Elizabeth, is undergoing major upgrades to restore the famed tourist attraction to its former glory. The project, which is a joint initiative between the Tourism Enhancement Fund (TEF) and the Ministry of Agriculture and Fisheries, received $8.5 million in funding from the TEF to complete phase one of the initiative.

The upgrades include the establishment of a bamboo nursery; planting of 400 bamboo plants; infrastructural repairs; procurement of tools and equipment; construction of cattle traps; and the installation of ground cover plants.

Speaking at the launch of the restored Holland Bamboo scenic avenue at the Holland Bamboo Primary School, St. Elizabeth on June 2, Tourism Minister, Hon. Edmund Bartlett, said that, “Before construction of the North Coast Highway made it more comfortable to travel from western Jamaica using that route, many people preferred using the South Coast to be able to enjoy the very scenic beauty of bamboos forming a lovely canopy.”

Bartlett also noted that environmental protection is not just the responsibility of government agencies and that with Holland Bamboo, for instance, “everyone that passes through this heritage site must hold him or herself responsible for the damage caused when cigarette butts are thrown among dry bamboo leaves and cause a fire, or rubbish is callously disposed of along the roadway.”

“I want to challenge the residents of this community, and in particular those who have been piggybacking on the attraction to sell their fruits and peanuts, to police it against those who show no regard for its beauty. We all have a part to play in protecting this beautiful attraction in Holland. This three-mile trail has both historical and environmental significance. “It is one of our treasures; help us to preserve it,” added Minister Bartlett.

In showing his appreciation to the Tourism Ministry and the TEF for partnering with the Ministry of Agriculture and Fisheries, portfolio Minister Hon. Pearnel Charles Jr. noted that, “I want to thank Minister Bartlett and the team who have really seen fit for us to identify this as a national project. You are not just dealing with what is a national heritage site.”

“This is the only of its kind in the Caribbean and for us to treat it, in terms of restoring it and keeping it in a state which is mitigated against all of the climate change things that are going to affect it – I think this is something that Jamaica can be proud to say that we have put our money towards and it is a good application of taxpayer’s money,” added Minister Charles jr.

Minister Bartlett also noted that the island’s southern coast is ripe for investment and will continue to be promoted heavily as one of Jamaica’s premiere destinations, noting that, “this Holland Bamboo project is just one of many projects on the South Coast that have been funded by TEF since 2019 to the tune of over $473 million.”

“St. Elizabeth has received $144 million of this funding, which has been channelled through various executing agencies ranging from municipal corporations to the National Works Agency, non-governmental organisations (NGOs), schools, and other community organisations that seek us out, adding that the tourism dollar “benefits our people” in a variety of ways, including road rehabilitation, beautification, environmental protection, and support for COVID-19 safety measures over the course of the year,” said Bartlett.

In addition to Holland Bamboo, the Minister shared that St. Elizabeth has been the beneficiary of several projects (funded by the TEF), which include the Billy’s Bay to Fort Charles Roadway, Beacon to Calabash Bay Beach, New Holland Crossing to YS Falls, and rehabilitative works on the Cedar Spring to Accompong roadway, Crane Road Roundabout, and Parottee Beach, allowing for ease of access and a better travel experience for citizens and visitors alike.

The tourism minister added that other projects either underway or to be undertaken include beautification works on the roads from Black River to Treasure Beach; from the Rest Stop at Scotts Cove to Black River Safari; and on the road from Leeds leading to Lover’s Leap in Southfield.